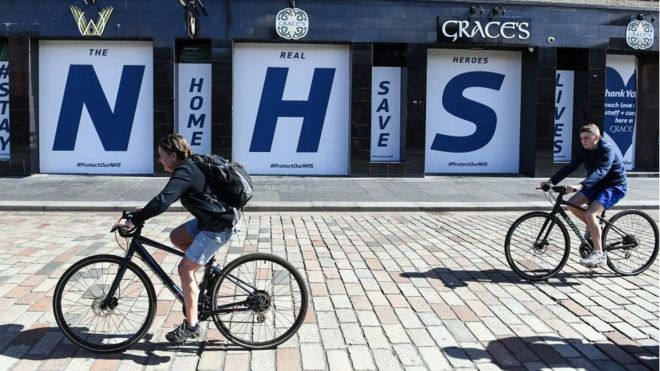 The coronavirus lockdown has prompted a big increase in cycling across Scotland, according to a national monitoring scheme.

Automatic cycle counters at 60 locations found in some places the number of cyclists more than doubled.

The biggest increases were observed in the Dunfermline, Newton Mearns and Dundee.

Cyclists are urged to practice social distancing by staying at least two metres away from others.

Cycling Scotland, funded by Transport Scotland, has been monitoring cycle use since 2017, using a variety of methods including automatic counters such as “piezo-electric sensors” buried in the road surface.

The organisation compared the average number of people cycling per day in the second half of March this year to the same period in 2019.

The locations of counters showing the biggest increase were:

“I hope people continue to cycle when we emerge from this crisis and carry on benefiting from the massive positive impact cycling has on our physical and mental health.”

Transport Scotland said travel has fallen from an average of 2.7 to 0.9 trips per person per day, with the number of people travelling by road dropping by two thirds since the start of March.

Kirsty Clift, a care assistant from Bishopbriggs, said she had been getting to work on a borrowed electric bike since the lockdown started, loaned by On Bikes.

“Before the outbreak, I’d normally drive to work. I wouldn’t cycle in Glasgow because I’m worried about safety; the roads used to feel too busy and dangerous and I wasn’t confident.

“The bike has been fantastic. The quieter roads have given me the confidence boost to ride my bike and you get a bit of exercise in the 20-minute cycle.

“It’s good for mental health too – normally in the car I just listen to music but on the bike, it’s just you and the wind. It makes you feel better, it’s a really nice feeling. I feel more energetic, and more positive.”