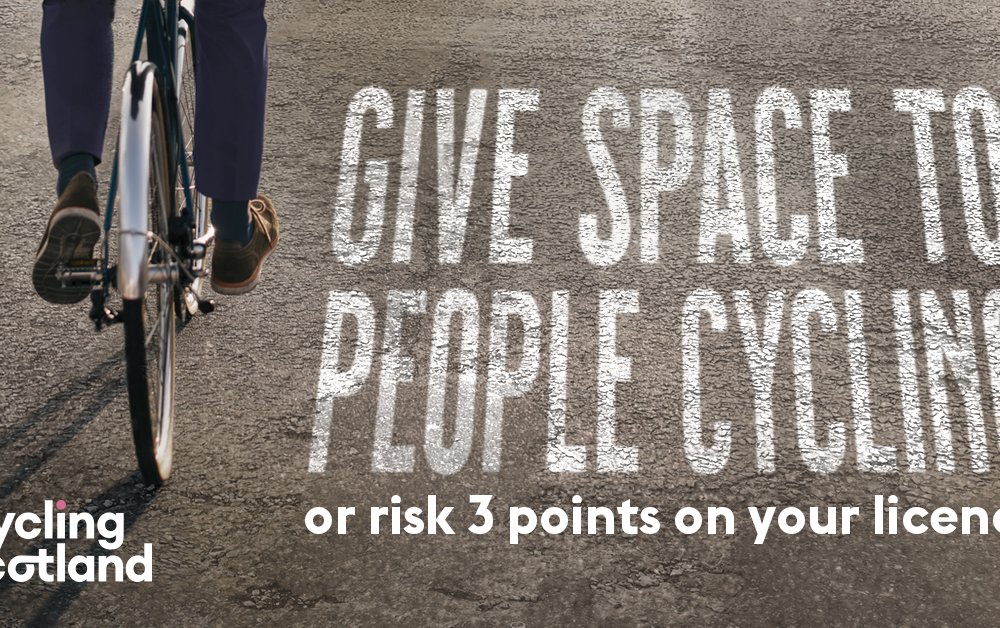 More than a third of people living in Scotland don’t always leave 1.5 metres and eight in ten (80 per cent) find it “frustrating” when overtaking someone cycling.

While two thirds of people don’t know they could get three points on their licence for driving too close to someone cycling on Scotland’s roads (a nine per cent improvement since last year).

These are the findings of two new polls of 5011 and 10,022 Scotland-based adults commissioned by the nation’s cycling organisation – Cycling Scotland – to mark the launch of its annual nationwide advertising campaign today (Monday 6 July).

Cycling Scotland’s road safety campaign is supported by Police Scotland. It is a careless driving offence for motorists to close-pass (overtake with less than a car’s width) someone cycling and puts lives at risk. People can get a fixed penalty of three points on their driving licence and be fined £100 – or receive a criminal conviction for more serious offences.

Close passes are an everyday experience for people cycling across the UK, according to the Near Miss Project, with data suggesting every year people who regularly cycle will “experience an event that is so frightening that it alone makes them consider giving up cycling.” In addition, latest road safety statistics3 show that every week in Scotland at least three people cycling suffer serious, life-changing injuries, usually from a collision with a vehicle.

Some locations in Scotland have seen a 77% increase in cycling during lockdown and according to Cycling Scotland Chief Executive Keith Irving this year’s campaign is more important than ever.

He said: “With a big increase in the number of people cycling during lockdown, it’s even more important that our roads are safe. Cycling reduces our carbon footprint, improves our air quality and is fantastic for the nation’s health, and for those reasons we have to make sure this renewed enthusiasm for cycling continues and expands.

“People driving need to be aware of vulnerable road users around them and give at least a car’s width (1.5 metres) and even more when passing at higher speeds. Often that means waiting at a safe distance until there is space to pass. Many people don’t realise that driving too close to someone is damaging even when no contact is made and can put people off cycling. Concern about road safety is also the main reason people don’t get back on their bike.

“As we move out of lockdown, we’re seeing an increase in road traffic and more tragedies on our roads as a result. Each week in Scotland on average, three people cycling suffer a life-changing injury in a crash and in most cases, it’s the person driving, not the person cycling, at fault.

“Dedicated cycling lanes, separated from road traffic, are the top priority for making our roads safer for cycling while education and enforcement wherever necessary is needed to improve road safety for everyone. Cycling Scotland believes that Operation Close Pass, improving infrastructure and, as soon as it can be implemented, third party reporting of dangerous driving behaviour are all necessary to keep us all safe.”

Cabinet Secretary for Transport, Infrastructure and Connectivity Michael Matheson said: “We know that perceptions around road safety remain a barrier to people getting on their bikes. Across Scotland, we’re building protected infrastructure to remove cyclists from traffic and will continue to do so by supporting local authorities. At the same time, road safety campaigns, such as this campaign from Cycling Scotland, remain vitally important to spark conversations, encourage new thinking and change behaviours.

“As part of the Scottish Government’s response to the COVID-19 outbreak, we’re asking people to walk, wheel and cycle where possible to help manage demand on public transport. Rates of cycling have increased across the country and it’s important that we keep up this positive shift in behaviour and that it is supported by all road users.

“Through continued education, enforcement and protected infrastructure we can all continue to support cycling as a mode of transport which protects our environment, our health and our wellbeing. The message from Cycling Scotland, Police Scotland and the Scottish Government is clear – give people cycling space when overtaking. Failure to do so is a driving offence and puts lives at risk.”

Cycling Scotland’s campaign – which runs on television, radio, social media and the backs of buses from today until Monday 3 August – is funded by Transport Scotland and backed by Police Scotland. Over the summer months Police Scotland will be conducting Operation Close Pass in locations across Scotland to promote the safe use of shared road space.

Operation Close Pass sees a police officer in plain clothes cycling with a camera on their handlebars and the back of their bike. When they are passed too closely by a car, the police cyclist radioes details to colleagues further up the road who pull over the motorist and direct them to a spot to talk to them about their driving.

The chat takes place by the roadside on a giant mat showing the correct minimum passing distance, usually defined as 1.5 metres. If someone is unreceptive to education then they will be cautioned for careless or dangerous driving and receive a court summons.

Police Scotland Head of Road Policing, Chief Superintendent Louise Blakelock, said: “As we work towards the Scottish Government’s casualty reduction targets, road safety for all road users remains a priority for Police Scotland, and we are fully supporting Cycling Scotland with their campaign.

“Since the coronavirus lockdown, we have seen an increase in the number of people using our roads for cycling. Now more than ever, we urge motorists to give cyclists, and other vulnerable road users, especially children, plenty of space. There is room for everyone and we encourage all road users to show consideration and respect for the safety of each other. We all have a duty to make our roads a safer place.”