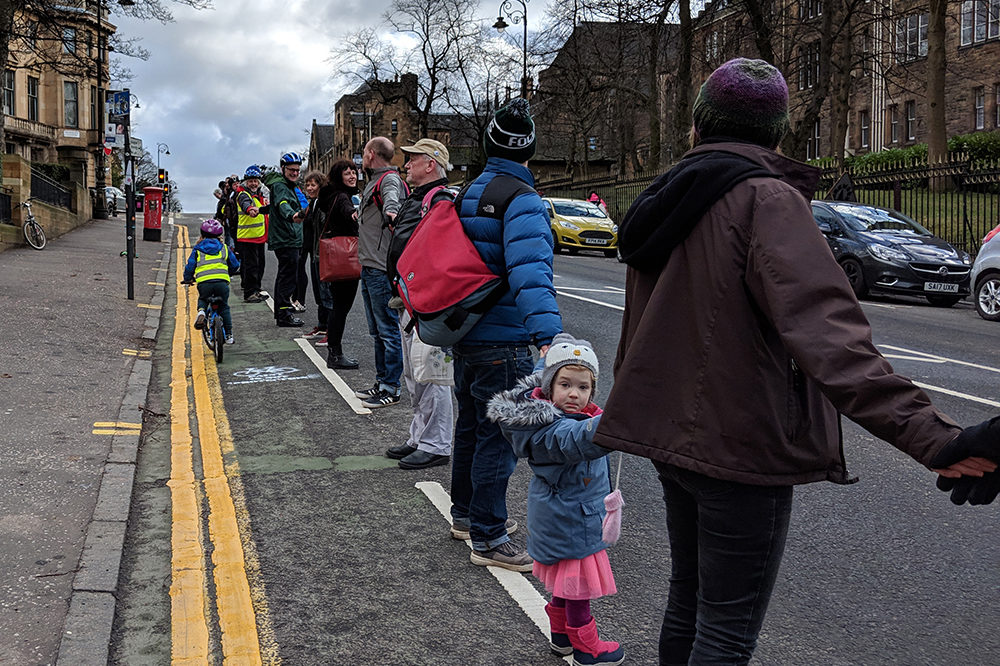 GoBike are the Strathclyde Cycle Campaign. We campaign for better infrastructure, policy, and political support for cycling to be a safe, efficient, clean and healthy mode of active travel for everyone.

While a great deal of the campaigning we do is for people who are already out there on their bikes, we actually put most of our considerations towards the people who don’t cycle. Those who would like to use active travel to get around, but don’t feel that the conditions are safe enough for them.

We campaign in a variety of ways, not least by responding to and advertising consultations that might involve improvements (or not) for cycling. Out on the streets, our recent campaigns have included a successful fight to have segregated cycling space reconsidered for Byres Road, a human bike lane to demonstrate that #paintisnotprotection on University Avenue, and a thank you tea break of tattie scones for the builders of the South City Way. We also use our GoBike Board of Shame to effect maintenance and repairs when ordinary requests have been ignored. We believe that cycling can become a normal way to get around in Scotland, but in order for that to happen, the first thing that we need is a linked up network of safe and direct cycle routes. These need to be separated from traffic and pedestrians, and leading to all corners of our towns and cities. We don’t have that yet, and it takes very strong political will to make that happen in a culture where car travel is considered to be a top priority on spending and space allocation.

As a result of strong campaigning from local and national cycle campaign groups, Scotland’s active travel budget was doubled a couple of years ago. Although this is a still not enough, it has led to a greater willingness of councils and councillors to support sustainable transport and active travel. We are now starting to see the benefits of this as we have some new cycle routes being installed in Glasgow, such as the South City Way, and the city Avenues.

New cycling infrastructure coming in is a drop in the ocean towards a fully linked up network though. The rate at which we are seeing it implemented is likely to have little impact before the point of no return on climate change is reached, unless we do more, and much much more.

We know that cycling can bring so many benefits, from vast reductions in pollution, to positives for both physical and mental health, to obvious benefits to congestion and parking issues, and savings on the NHS. And maybe most of all, because it’s fun. And that is why we campaign – so that everybody, of all ages and abilities, can experience the wonders that cycling brings.

Please join us and help.