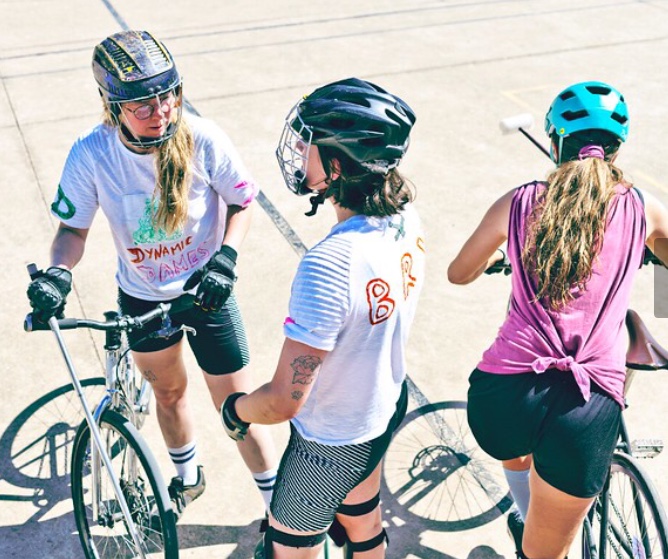 Bike polo: a sport I started a year ago and fell for hard.

In October 2019 I had the opportunity to head out to Portugal to play in a week-long Bike Polo tournament called Helles Belles, for women, trans and non-binary people. The team from Glasgow and I were delighted to head into the sunshine.

The game of Bike Polo is played 3 against 3, on small framed single-speed bikes with one front disc brake. Using mallets, held in the right hand, the aim is to get the ball past the other team and into the goal. Feet touching the ground results in a time penalty. Normally teams are co-ed. The games last 10 minutes and are fast, occasionally aggressive, and always a lot of fun.

The girls from Glasgow and I boxed our polo bikes up and flew out to the Algarve, arriving into 30 degree heat and wall to wall sunshine.

The small town Barao de Sao Joao was to be our home. Cycling around we were met with shouts of ‘the polo is back! from the local people. This was a surprise, the sport being a niche one and very rarely recognised. We soon discovered the village has become a kind of home for Bike Polo, with October Sun being hosted every year (a co-ed tournament), and now Hell’s Belles.

Slowly more and more people arrived from across the world and made camp in the woods next to the court. Sleeping in hammocks, on the ground, in campervans and in one case a converted hearse, it was a sight to behold.

The games were tough, and my team and I were all new to the game. We lost a lot, lips were split, elbows skinned, and some serious tan lines developed. When the games were done and bottles of Super Bok (Portuguese lager) were opened, we settled into catching up with friends made at other tournaments, meeting new incredible players, and heckling our Glasgow pals on court.

In the afternoons we cycled to the beach and surfed, lounging behind the break on our boards, realising that Bike Polo is definitely easier than surfing. In the evenings we drank in the village bars and played ‘pick ups’ (non competitive games).

We hiked up into the hills,  road tripped to the Atlantic coast and climbed rocks in the mist created by the huge waves.

It was a dream trip and something I never thought I would get to do. To compete in a tournament with some of the best players in the sport, to watch, learn and listen, and to be encouraged and supported by them was truly wonderful. Here in Glasgow we have an incredible Bike Polo community and we’re always excited to meet new people and get more people playing. It is a sport about fun and friendship and is for everyone. If you’re at all interested please get in touch and come along!