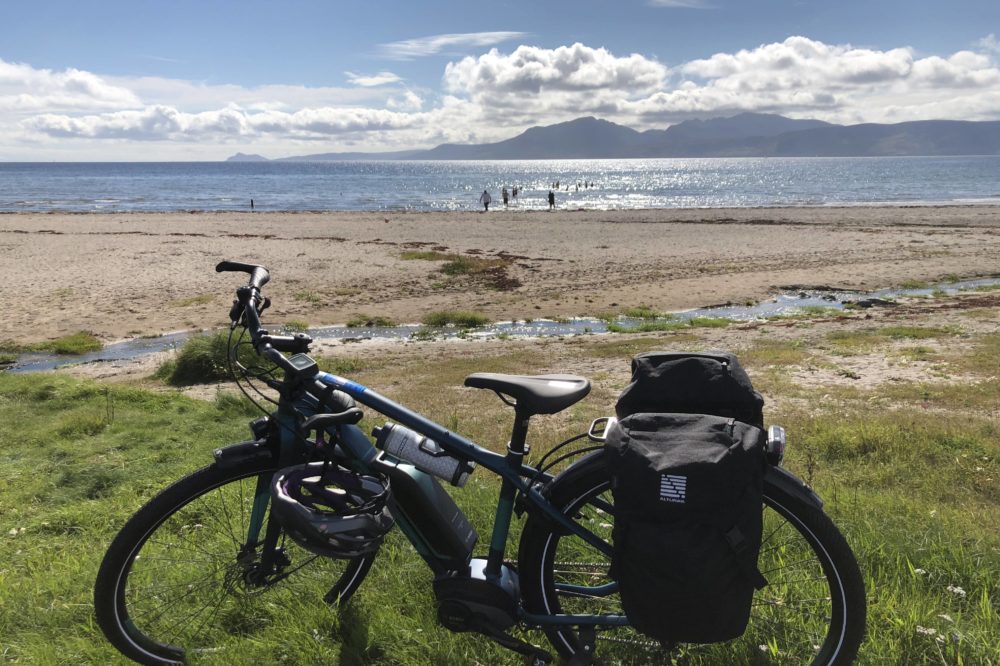 Last September, Bike For Good South Community Hub planned a day trip to the Isle of Bute, for the kids who had been attending the after-school and summer clubs.

It was an early start, with two vans full of bikes and food setting off for Wemyss bay. The rest of us headed to the train station at Queens Park. At the platform we realised some of the boys had never been on a train, never mind a ferry!

Hannah had kindly packed snacks for everyone, but the kids had bags full of their own. They were already on the energy drinks and hanging from the luggage rails by the time we set off. One person getting off the train did wish us luck for the day, and we would be needing it!

Arriving at Wemyss Bay after a much-needed toilet stop, we fitted everyone with bikes and helmets and got in the queue for the ferry. We boarded and made our way upstairs, and decided it was best to direct the boys to the deck, in an attempt to contain their exuberance.

View from the ferry

It was turning out to be a grey and windy ‘dreich’ (Scots for ‘dreary’!) day, and I was not looking forward to the weather. The sight of a pod of porpoises lifted my spirits, and there were many sail boats out too. Perhaps they knew something I didn’t!

We docked in Bute, disembarked and got to organising the keen riders. It was decided we would ride in two groups: Team Bananas and Team Apples. Each group had five boys and five adults. It was decided I should be front lead and Ilene would take the rear. We set off in single file with an adult on the right as protection from traffic, constantly reiterating that they had to hold their positions and overtaking was prohibited.

Within a few minutes of hitting a climb the boys started calling for a stop break. They did not know how to use their gears and the incline was challenging. I thanked God for the Stallion (my e-bike) as I made it up the hill effortlessly.

We set a steady pace despite occasional stops and close shaves with some boy racers. By the time we reached the beach, the sun was out and the clouds were gone – turning it into a glorious day. The kids abandoned their bikes, quickly changed and ran into the water. I decided to stay firmly on dry land. I would have enjoyed paddling in shallows but couldn’t be bothered with getting sand in my shoes.

A beautiful cycle stop on the beach

We served lunches as everyone came out of the water, shivering and trying to warm up. A hot soup would have been much appreciated by them, but sadly we only had cold sandwiches on offer. After some sunbathing, beach football, and an acro-yoga demonstration, we packed up and headed back up the road.

The five miles back seemed quite tough for a few, but as we taught them gears and freewheeling the miles flew by. As we came into town, I made the mistake of entering a ‘No entry’ one-way road, the wrong way, of course. Everyone followed blindly, and when we came out the other end, I received a small deserved telling-off from Ilene! The boys were all oblivious to what had happened, and we got them on the ferry safe, well, and homeward bound.

Hot chips and free reign of an empty carriage on the train back were the perfect end to a perfect day!

If you’re interested in group led rides, check out your available options.

Bike For Good on Aye Cycle