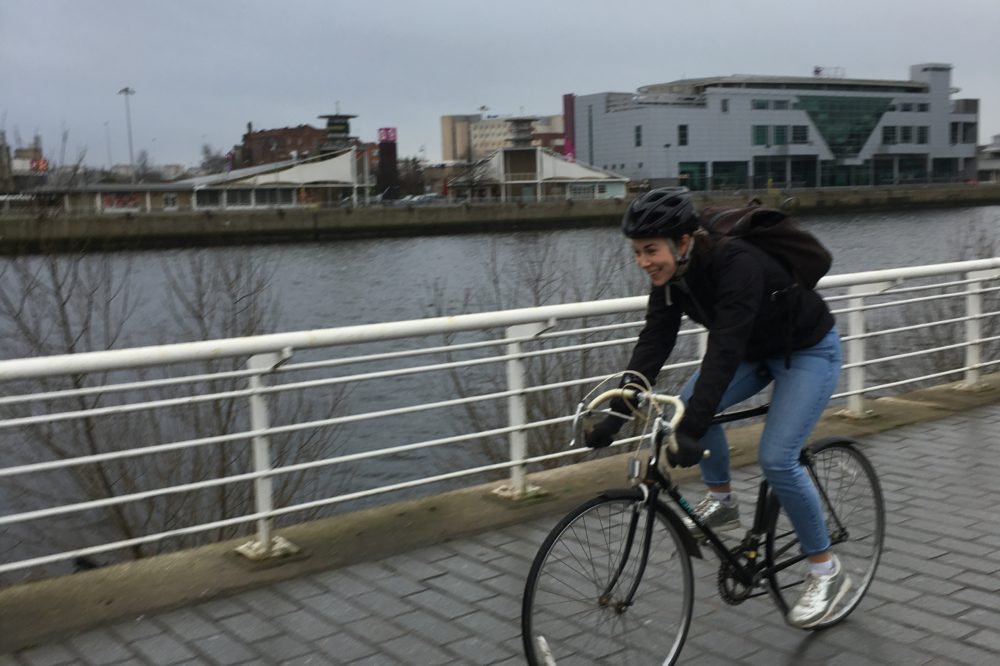 I started cycling when I moved to London in my twenties, quickly discovering that it was the best, cheapest and quickest way to get about, and helping me to piece together this new city that I’d moved to.

So, when I moved to Glasgow ten years later, it was a no-brainer for me that my bike was going to be the best way for me to get to know this new place I was to call home.

However, I have to admit, after years of cycling in the capital with big packs of other bike commuters and a decent amount of cycling infrastructure, the south might have made me a bit soft. Being on a bike in Glasgow felt like a different experience and, though I’m confident cycling on roads, fewer segregated paths and even more drivers keen to get to wherever they needed to be quickly, did feel a little daunting.

Despite having to bring my waterproofs out a little more than I would have liked, I’ve stuck at it and have picked my favourite routes that have helped make Glasgow feel like home…

When I lived in Yorkhill, I felt really lucky to have the Sauchiehall Street ‘Avenues’ project connecting part of my commute from home to work and could feel myself relax when I leave the busy-ness of Charing Cross and get onto the separate path.

Yes, as Lee Craigie pointed out, it’s not perfect, but it’s such an encouraging sign that a major road in Glasgow has reclaimed space from the private car and returned it to people for them to walk, cycle and spend time. I’m looking forward to seeing the avenues project continue to develop, making it possible for more people to walk and cycle easily and safely.

Having recently moved to the southside, I’m also really excited for the South City Way to be completed; it’s going to make a big difference to cycling home feeling safe on a segregated path, and look forward to seeing more of the network expand south of the river.

The cycle from Kelvingrove Park along the River Kelvin is a favourite of mine. A couple of inclines aside, it’s virtually flat – which is an instant win from me – and the feeling of cycling right beside the river and through the trees is a lovely escape. Along the way, you can hop on and off the pathway to nip to the shops or get a coffee and it’s a perfect green escape from the busy roads of the west end.

A sunny day on the Kelvinside Canal

Word of warning, it does get busy at the weekend with people walking, pushing prams and walking dogs so it’s obviously good just to take it steady and be mindful of others.

Some of my favourite rides have been from the city out to both Loch Lomond and to the Kelpies. It felt great to leave my flat and for two hours think of nothing else but riding my bike, with the prospect of iconic Scottish sights at the end.

Both rides are flat (can you tell I don’t like pedaling up hills?!), run alongside the canal and are well signposted so there’s little chance of getting lost. There’s also something lovely about cycling next to the canal: you get to have a wee nosy in people’s backyards, and there’s a real mix of people, ages, abilities out enjoying the waterways.

When I cycled to Balloch I felt this big sense of achievement as it was the furthest I’d ever cycled, and it felt really great to explore somewhere new. When my legs started to get a bit tired 2 miles from Balloch, I spurred myself on with the prospect of fish and chips – yum!

My ride to Falkirk was in December 2019 when I was getting a bit sick of going to and from work in the dark. I took a sunny Monday off work and rode out west along the canal, spotting deer, cormorants and herons along the way, stopping to look at the amazing Falkirk Wheel and for a big hot chocolate when I made it to the Kelpies.

Happy Clare on a cycle!

I’d say to anyone in Glasgow thinking about cycling to give it a go and get on your bike: it’s a great way to get to know your city, affordable, fast and will keep your mind and body healthy. Yes, you might need to invest in some decent waterproofs and it would be disingenuous to say that there have been times that the busy roads have given me pause for thought, but cycling is a brilliant way to get around Glasgow. What are you waiting for? Go and get on your bike…

Interested in exploring Glasgow further? Check out routes around the city.