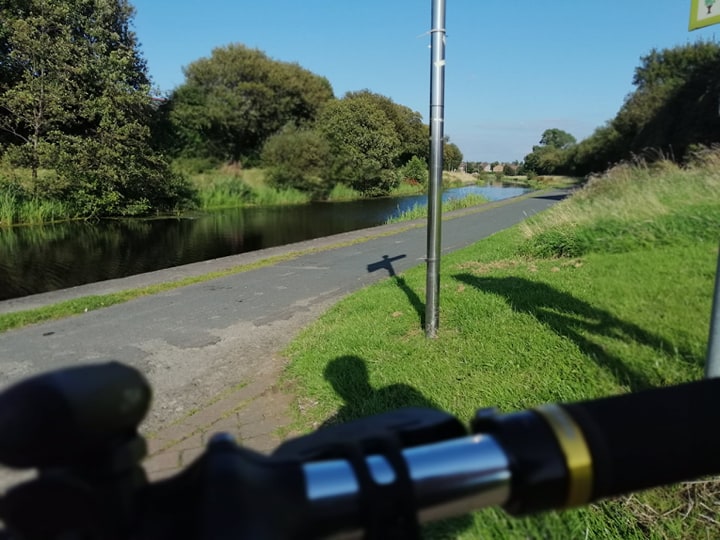 Moving to a new city always brings on mixed emotions. Nervousness and trepidation are blended with excitement. However, there’s  a sweet period at the start, when everything’s new. Despite all the stress there’s the pleasure of exploration, and every hidden corner you feels like a brand new discovery. Without a doubt, the best way to find your little secret places and fall in love with a city is by getting on a bike. In fact, I’ve had the chance to do this again recently, when I moved to Glasgow from Northern Ireland at the beginning of summer.

I loved riding my bike when I was little, messing about on Saturday afternoons. Still, I never really “discovered” cycling until I moved to Eastern Germany in 2015. What started out as simply a way of getting around quickly progressed into full-scale “hobbydom”. I learned about the incredible feeling of freedom you get from a bike, heading along a path, not knowing exactly where it’s headed (but not really caring). One time this took me to the middle of a huge field, with no choice but to wade out through the mud! Though it didn’t seem funny at the time, that memory is something I still look back on with a  smile on my face. In Birmingham, while studying for my Master’s degree, I bought a rickety old ‘60s race bike with ‘Misty’ emblazoned on the side.  After Misty came ‘Declan’ (from Decathlon) in Lisbon. In Glasgow I got my first (yet unnamed) fixed gear bike, gifted by a kind colleague of my partner. It’s taken a bit of getting used to – especially when going up and down the city’s many hills – but the speed and wind in my hair makes every journey feel like the Tour de France.

Moving back and forward between places has also shown me how different cycling is everywhere you go. You never get bored. If things get a bit repetitive or dull, you can just head out on another route. It beats staring at a blank wall in a gym anyway. The joy of cycling in Birmingham came from the maze-like network of old canal paths and disused railways, places where greenery encroaches in on the industrial, Victorian city. Lisbon brought with it the pleasure of cruising past beautiful blue ocean, cliffs and sandy beaches. Although, the pleasure of riding under clear blue skies was slightly tainted by unsympathetic drivers and mountainous streets!

Cycling in Glasgow has been different too, mostly in a positive way. I’ve been able to see parts of the city I probably would’ve missed otherwise. When you travel on a bus, train, or car you don’t really notice anything except the places you stop. On a bike, you don’t pass through anywhere, instead you’re present for every inch of the journey.

An evening commute to Rutherglen

Twice a week I head across from where I live in Partick, to Rutherglen,  where I’m part of an amateur dramatics group. To my delight, I’ve found that there are paths hugging the side of the River Clyde almost the whole way. This doesn’t make it dull though, as the riverside landscape switches from glossy modern bridges and glass buildings, to imposing concrete, then back to green trees, grass and narrow walkways. It’s not the only waterway worth exploring in the city either! Heading along the Forth and Clyde canal I’ve seen glimpses of urban wildlife, including little baby moorhen chicks. One of the more surreal experiences of cycling in Glasgow however, is under the river, through the Clyde Tunnel, with its eerie silence and white walls surrounding you as you head deep beneath the ground.

Another new thing I’ve found while cycling in Glasgow is the joy of led rides. Before, a day out on my bike was just something to do with a friend, or alone to clear my head. In fact, I’ve never really been someone for team sports, and memories of school PE lessons still haunt me to this day. As a result, I wasn’t all that sure when, on the urging of my girlfriend, I decided to head out on my first led ride with the cycling charity Bike for Good. I needn’t have been worried – the atmosphere was really friendly, and I got talking to people right away.

There was none of that pressure, posing or implicit competitiveness I’d always associated with group exercise before – just a group of people passionate about the same thing taking a day to get away from it all.

The whole thing was so relaxed, I didn’t even notice that we had cycled close to 50 miles until someone pointed it out to me.

A cycle along the canal

Since then, things have been a bit busy and chaotic, with rehearsals heating up and a move of flat. After that’s over, I’ll be on my bike again, and back on some more led rides. I’m also planning to follow the paths to Loch Lomond, and seeing what I can explore there. Plus, another move means another chance (and excuse) to explore somewhere new, and to see what the South Side of Glasgow has got in store.

Join a led ride in Glasgow